If you have followed my blog for a while you have probably seen postings promoting Reilly Bodycomb's digital downloads, DVD's, and seminars that I have impressed me.  When I was a purple belt I started to realize it was high time to start working on leg locks.  In hindsight I was very late to the game and should have been doing them much sooner. Since that time I've been lucky enough to train with Reilly at least once per year since then at each respective belt rank.  Now as a black belt (the paint is still fresh) I am fully aware my knowledge of leg locks is still incredibly poor.  In addition there are other aspects to my game that need a lot of attention and Reilly's approach to submission grappling gives me an opportunity to fill these gaps.

July 3rd our gym www.ndmma.com hosted Reilly for a seminar that was well attended (yes even on a Friday evening one day before a major holiday).  Just like previous seminars when we've had Reilly the general consensus from those that attended was "this is the best bang for the buck seminar ever!"  I know I was not disappointed at all; myself and those there that night seemed to really appreciate his conceptual approach to grappling and instruction.  As an instructor and student of grappling Reilly inspires me to be a better instructor and think critically in a different manner than my mind typically works.  I won't go into all the details of that seminar and the content covered simply because the focus here is about the two day training camp I attended last weekend in Houston.

Pics from the seminar hosted at North Dallas MMA on July 3rd: 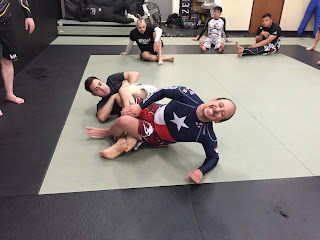 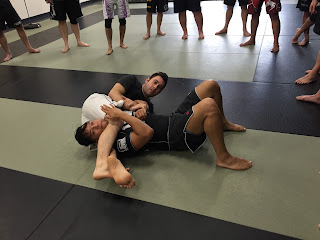 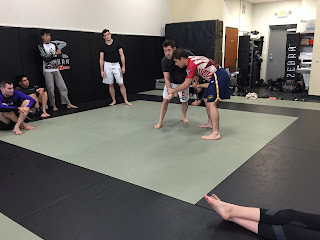 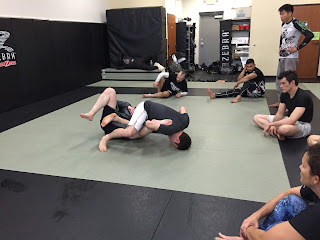 Now on to the GOOD STUFF.  Let me preface by I have not attended a training camp like this.  In a nutshell the camp consisted of two days, broken into two training sessions (two hours each with a two hour break in between each day).  I've highlighted some but certainly NOT ALL of the content covered during each session. 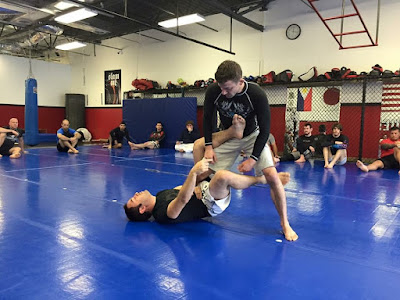 As if this all wasn't good enough, Reilly set up an in-camp tournament for those interested in competing.  It was run on Day 2 after the third session.  The rule set was such that it forces both competitors to push the action at all times. Stalling of any sort from any position would result in a point given to the opponent.  Take downs, legitimate submission attacks, ride time from knee on belly, sweeps all would account for a scored point.  If you pulled guard and did not immediately work a submission or sweep you could potentially have points scored for the opponent.  First person to submit or gain nine points would be declared the winner of the match.  No time limits.  We had a odd number of guys in our 140-170lb weight class so the first competitors to get two wins would qualify for the finals.  The competitor with the longest combined match times would not be qualified to compete in the finals.  Knowing this wasn't a rule set that is favorable to my own game I figured "what the heck, let's do it and have fun."  We had a division of six competitors in the big boy weight class as well so we alternated matches between the two.

The result?  It forced everyone to attack like crazy and I believe only one match ended by points. The rules allowed for reaping (Oh Heaven!) and all foot locks were good.  I could see this rule set being used in big tournaments because it produced very aggressive matches.  I don't think a single match ever exceeded 7 minutes.  I managed to win both of my matches via Estima Lock but missed the finals as my total match times were a little too long (4:00 min & about 2:30 in the second match). Regardless of missing the final I was super happy to catch those subs as I've never finished with leg locks in organized competition before.

Here is a HL video of that in-camp tournament.


The value of this camp was ridiculously good.  $200 for over eight hours of training is hard to beat in my book and I've been to my fair share of seminars.  It was a cool chance to meet a lot of different people that traveled from places like Maryland, South Carolina, New Mexico.  I can't stress enough the value that Reilly offers in private lessons, seminars, camps, and especially his DVD/digital downloads.  He doesn't hold back information and gives you his best every time.  We were also lucky to have one of Reilly's top students Denny in the house to help with the seminar because it was packed...about 25 people each day.

Also a big thank you to Eddie Alevar that owns/runs Ground Dwellers in Spring, TX.  He was an excellent host and invited us all over to watch UFC 189 at his house which was a blast.

Side note:  Reilly Bodycomb will be competing against Richard Cummings at Polaris 2 in September. This event will be streamed live so check it out.  The card is looking pretty amazing with tons of talent.  http://www.polaris-pro.org/polaris-blog/2015/5/8/polaris-2-fights-announced 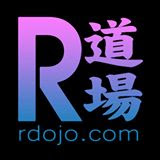